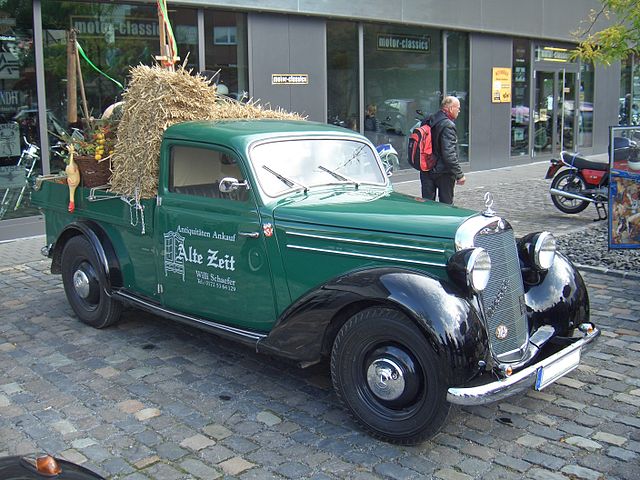 “Mercedes-Benz pickup truck” sounds a bit like an oxymoron, not unlike “sexy van targeted to a single guy” or “humble luxury sports car.” Mercedes is known for making sleek, sexy performance cars for the elite, not for the type of vehicle marketed to cowboys with commercials that feature a gravely-voiced actor proclaiming phrases like “rough and tough” and “get the job done.” The two things don’t mesh well in the mind, like mixing chocolate with, instead of mint or peanut butter, fish sticks. But strangely, the company has made working vehicles before, like the above-pictured 170V Pickup W136 from the 1930s, and it looks like they’re making one again, which will launch in 2020 (though some have rumored a launch as early as the fall of 2017).

Expected to show up at the Paris Motor Show later this year, the Mercedes-Benz pickup truck, rumored to be called the X-Class (or the Z-Class, or the GLT), has gotten a lot of press, possibly because it’s such a weird combination. Designed with the codename “Andrew” to compete against the award-winning Volkswagen Amarok and the popular Ford Ranger and based at least somewhat on the Nissan Navara, it’s clear that it won’t be available in the U.S. This is either due to the amount of competition with American brands in the States or because of the hefty 25% tax on imported light trucks, called the “chicken tax.” It’s rumored to be coming to Australia, South Africa, Europe, the Middle East, and Latin America only.

In an interview with Car magazine, former AMG chief Volker Mornhinweg said, “We are not going to develop a fat cowboy truck for North America.” It’s a smart move, as it will go to worldwide markets that are largely untouched by “the big three,” as he calls them (GMC, Ford, and the Dodge Ram). Nissan and Mercedes will co-produce the X-Class as a small, lightweight, highly functional pickup for a wider market. Some have suggested that the vehicle could come to the U.S. if it’s built at their Alabama plant, but it’s unclear at this point if that’s in the cards. (If you’re an American upset about the fact that these vehicles aren’t coming overseas, as many are, perhaps bother your congressperson about the tax that favors local companies.)

The debate between Mercedes-Benz fans is whether the new pickup truck will be a functional workhorse or a luxury symbol. There are some details that are fairly set in stone: It will feature a four-door cab. There will likely only be a handful of choices for the engine itself, including a four-cyclinder, six-cyclinder, or hybrid engine, with the latter appearing last. There will likely be two versions, with one being luxurious like the GLE and the other being simpler and stripped down. Reporters have so far claimed anywhere between a 6,600- and 7,700-pound towing capacity. The base price has been rumored to be around $30,000 to $40,000. The depictions of the body of the vehicle have so far been sleek and curvy, similar to the brand’s SUV models.

While it may not be coming to the U.S., we hope to at least be able to drive the thing. Should we be excited for the Mercedes pickup truck? Probably not, but some of us certainly are anyway!