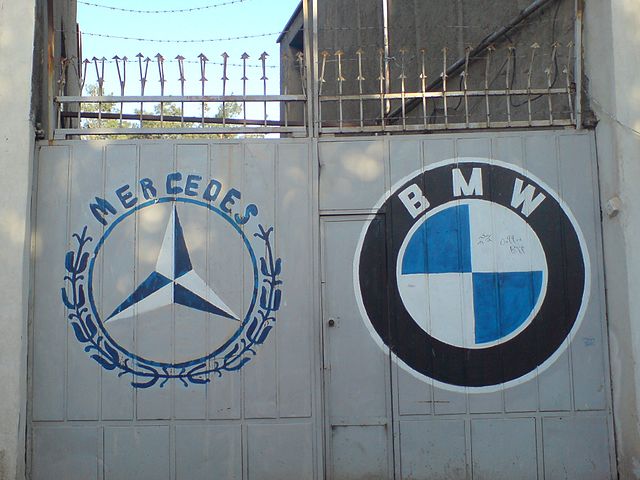 Mercedes-Benz and rival BMW are like the Coke and Pepsi of the German car engineering industry. They’ve been at it pretty much since BMW, or Bayerische Motoren Werke AG, opened in March of 1916. And the rivalry doesn’t look like it’s going to stop any time soon. Stuttgart and Munich have had a sassy attitude toward each other for a century in an odd combination of playful jabs and actually threatening business moves.

A Century of Sass

In March of 2016, Mercedes-Benz was so sassy that they offered free admission to the Mercedes-Benz Museum and a free meal to the first 50 BMW employees! That’s like saying, “Come and look how much better we are at everything.” They also really like to gloat about the fact that Karl Benz invented the automobile 30 years before BMW was founded. They’re as bad as siblings. Older doesn’t mean more mature, Mercedes! But then again, with billboards like this, maybe it does. That’s just mean, BMW! But at least it hasn’t gotten as bad as the strange billboard war between BMW and Audi, rife with chess metaphors. What’s next, a thumb war?

BMW Vs. Mercedes: The Real Competition

But don’t let cute, funny tweets, backhanded invites, and hilarious billboard wars fool you: The rivalry is real and sometimes downright dirty. BMW has surpassed Mercedes in sales. And in 2012, Mercedes cunningly built a car plant in Hungary to cut into BMW’s markets for small luxury cars. This was a bold move to try to directly compete. Both companies are, at their cores, business competitors, and as such, there’s a great deal of nail-biting one-upmanship involved. BMW, Audi, and Mercedes-Benz all have been fighting for European and overseas markets for decades. Luckily for us consumers, that means that they’re working hard at out-innovating each other, creating the best of the best technology to beat each other to the punch.

When it Really Started

The two companies have always been logical business competitors; however, they occupied very different markets in their early histories. BMW knew how to build planes and cars and was most known for motorcycles for many years. The competitive, fierce atmosphere really became intense in 1959, when Daimler-Benz attempted to buy BMW through the Deutsche Bank. The Quandt family took over, and BMW got out of bankruptcy. At that point, the only car keeping the company alive was the front-opening, strangely shaped BMW Isetta.

In the modern era, it’s hard to tell who’ll come out on top. Mercedes suffered by having to combine with Chrysler, and BMW improved by proving that their brand is quality to American audiences. Since the 1980s, the companies have been neck and neck in the great race for the hearts of consumers who crave a luxury car experience. Neither brand has particularly been hasty when embracing new hybrid or electric technologies, which is strange for two companies that focus so much on quality and innovation. Mercedes-Benz’s sister brand, Smart, hasn’t caught on as quickly as expected. And BMW’s little Mini brand isn’t actually all that great on gas for its size.

If they keep focusing on each other and not the wider market, newcomers like Tesla and Japanese luxury brands like Lexus may take it all! Hopefully, another century of competition will help both companies create great car models that are good for both their consumers and the world.