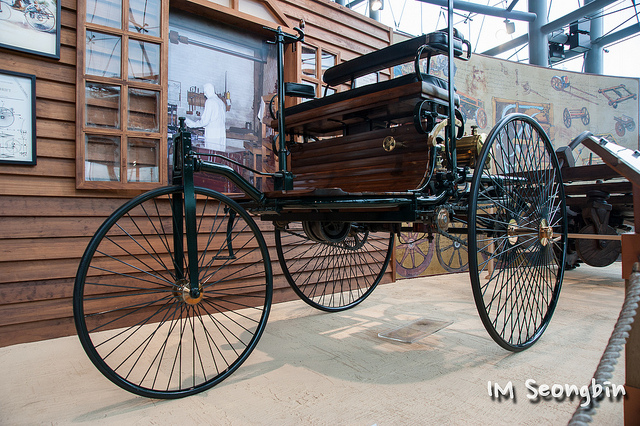 Carl Benz was the mastermind behind the world’s first automobile, which rolled out for its debut to the world on December 31, 1879. This innovative vehicle was called the Benz Patent Motorwagen. It had a single-cylinder, two-stroke engine that caught the public’s attention almost immediately. Working with the two-stroke engine was difficult, but Benz had little choice due to a patent belonging to Nikolaus August Otto on the four-stroke engine, which was granted in 1877.

Benz’s ultimate dream involved the creation of a gas-powered car that was light in weight, with the chassis and engine connected as a single unit. Benz’s masterpiece of innovation had features and designs that look nothing like the cars of today. It had a tubular frame and three-spoked wheels that made it look more like a bicycle than a car. The engine sat horizontally in the rear of the vehicle, and it had an output of 0.75 horsepower. To steer this vehicle, the driver sat on a bench and held onto a smaller tiller with both hands. The tiller set the direction of the car by turning the single front wheel. To slow down or stop, the driver used a hand lever that controlled a block covered with leather, which slowed the wheels. Benz realized that he had a winner with this design, so he applied for a patent in 1886.

The Benz Patent Motorwagen had many of the features still present in car engines of today, including a cooling system, a crankshaft, and an electric ignition. This impressive vehicle attained a top speed of almost 10 miles per hour, which was about the same as the speed of a horse. Horses were probably comparatively quiet, though. The Motorwagen was said to have made loud hissing and snorting sounds that made it look like it was struggling mightily to move down the road.

Speaking of roads, this is another major difference between travel of today and travel of yesteryear. Roads didn’t exist then, so drivers were forced to find their way to their destinations over virtually any type of terrain. Breakdowns were common, and a lack of mechanics and garages was another challenge for drivers. People had to diagnose and resolve their own mechanical issues instead of turning the work over to experts.

With strong consumer interest, Benz worked diligently to improve his automotive designs. Soon, models were available with a folding top and even a light in front for helpful illumination at night. Bertha Benz, Carl’s wife, was also involved with design improvements. It was Bertha’s suggestion to add a lower gear to use when climbing hills. Bertha Benz also receives credit for taking the first long-distance drive in a car. In 1888, Bertha and her two sons decided to use the current version of the Motorwagen to travel to a nearby city to visit family. The trip was difficult, and they ran into many challenges. When the travelers ran out of gas, Bertha had to get creative with products available at a pharmacy. Making repairs along the way with impressive ingenuity, Bertha and her sons reached their destination. This trip had a big impact on the history of the vehicle. Benz was able to work through some issues plaguing the car, and her trip earned publicity that helped spread the word about the Motorwagen.

Carl Benz was an automotive pioneer, working tirelessly to further his inventions. The people who embraced his Motorwagen were pioneers of sorts, too. This was a brave new world they were driving into, full of unheard-of designs and challenges. This fact remains, however: The engine present in the Benz Patent Motorwagen was the predecessor of every internal combustion engine of today.